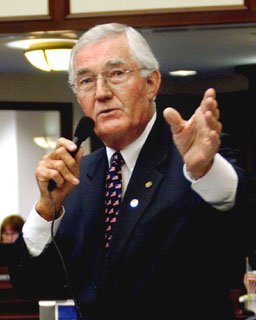 The Don Davis Film Finishing Fund annually provides cash and in-kind production services to deserving filmmakers needing help to complete their film projects. The projects submitted have a broad range of subject matter and are judged by a committee of top industry professionals. As its name implies, the goal of the fund is to provide financial and/or in-kind support to filmmakers in order to finish their films. This is done through an annual judging processing.

“The funds namesake, Don Davis, was instrumental in passing legislation that has resulted in jobs and growth for Florida’s film industry,” said Graham Winick, Past President of Film Florida. “Representative Don Davis revived our industry by spearheading legislation that truly took our state to a more level playing field with other states also competing to bring in production business.” Then-Florida Lt. Governor Jeff Kottkamp agreed, “This is a fitting memorial to Representative Don Davis whose hard work has helped grow Florida’s film, television and digital media industry incentive program.”

In its first year of inception, the Fund was awarded a cash donation of $10,000 from Universal Studios Florida Production Group (USFPG) and its parent company NBC Universal. At stated by Pamela Tuscany-Warren, Vice President of USFPG,

“We are saddened that our industry has lost a trailblazer, and want to continue his legacy with the Don Davis Film Finishing Fund that will assist filmmakers for generations to come. We think the creation of this fund will serve as a tribute to him, and that’s why we didn’t hesitate to contribute.”

Currently, the sponsors of in-kind grants are continuing to develop and grow. The program funds filmmakers working in both short and long formats in all genres- documentary, dramatic, educational, narrative, animated and experimental- whose films demonstrate advanced and innovative skills and whose works relates to the goals of Film Florida.

Currently being established and will include post production services.

In order to apply for a Finishing Fund grant:

Application fee of $35.00. Please make check payable to Film Florida and send the completed packet to:

Recipients of the Don Davis Finishing Fund will be obligated to have finished film carry Film Florida logo in end credits, and filmmaker will have to be available for press opportunities.

Film Florida is legally responsible to the grantor(s) and must ensure that all funds are being used in accordance with your project proposal and budget. Film Florida must also guarantee that all activities are conducted according to IRS regulations and to that end, we will monitor all contributions received and expenditures of the funds.