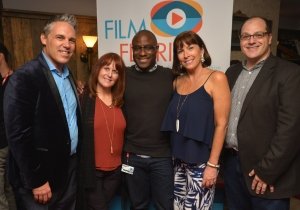 Registration is now open for the 2019 Toronto International Film Festival (TIFF), which will take place from September 5-15, 2019. The Toronto International Film Festival has become one of the most beloved cinematic events in the world, universally regarded as an ideal platform for filmmakers to launch their careers and to premiere their new work. The Festival has been described as “the most important film festival in the world – the largest, the most influential, the most inclusive.” TIFF continues to grow both as a major festival for Hollywood award films, independent film and international productions, as well as establishing a strong film market tie in with many international buyers and sellers. TIFF also hosted the premiere of the Academy Award Winner for Best Picture, Moonlight, in 2016 (right).

To participate with Film Florida and take advantage of the best price, you must commit by Friday August 23, 2019 by sending e-mail to info@FilmFlorida.org. Prices will go up after this deadline. This year we are offering a “Badge Only” option for $950 ($1,100 for non-members) along with the “Full” registration which includes the Film Florida Reception at TIFF. Registration for the “Full Package” will be $2,000 ($2,300 for non-members) and includes the following:

If you are not currently a member, we encourage you to consider the value of joining this statewide organization. Film Florida’s growing membership provides a network, a platform and the chance to play an active part in solidifying Florida’s position as a major production destination. If you are interested in learning more about membership options, please email info@filmflorida.org or click HERE.