Pompano Beach, FL. (Sept. 23, 2021) – BrandStar Studios, a division of BrandStar, has completed a multi-million dollar upgrade to its studios, allowing them to provide the newest, most cutting-edge technologies in the world of production, including virtual Production, extended reality, augmented reality and mixed-reality capabilities, all in real-time. 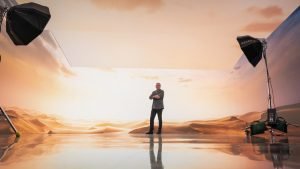 BrandStar Studios has employed a full team of Unreal Engine CGI artists, allowing for the development of the highest photo realism virtual environments for set builds, with available interior and exterior scenes from around the world.

“We can basically put anyone, anywhere, in real-time,” said Mark Alfieri, CEO of BrandStar. “The combination of equipment and technology makes us a true next-generation studio. We are comparable to the most sophisticated movie studios in California.”

The enhancements feature one of the largest LED Volumes (screens) on the East Coast, measuring over 13 feet high and over 100 feet long, all within BrandStar’s 43,000-square-foot facilities. The LEDs are the latest technology with a 1.9M pixel size allowing for true 8K resolution. 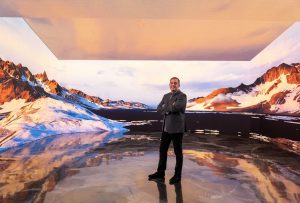 “There’s a reason the technology leverages ‘Unreal,’” adds Alfieri. “It allows us to create super high-end productions quickly, utilizing the same in-camera virtual environments that major studios are deploying to film their most technology-intensive programming.  We will use this technology to produce music videos, virtual events, high-end commercials, television shows, feature films, basically anything anyone can dream up, we can produce it.”

BrandStar is using this advanced technology in production of their own shows, which include The Balancing Act and Military Makeover with Montel, airing on Lifetime.

Other Critical aspects of the multi-million-dollar upgrades include:

“The response from our clients to the upgrades has been extraordinary,” concludes Alfieri. “We have clients from California booking the studio for their Virtual Productions. We have no doubt these advancements will be an extraordinary step forward for all of Florida’s production capabilities.”

###
About BrandStar
BrandStar is a fully horizontally and vertically integrated production company, marketing agency, and content exchange platform. Offering everything a full-service marketing firm provides, but with a twist – our focus is on positively impacting people’s lives. Fueled by the collective passion of entrepreneurs, creatives, technologists, and thinkers, we pride ourselves in being Marketing Matchmakers – connecting people with brands to do life better. Utilizing a combination of creative storytelling, marketing strategy, results-driven media, technology innovation, and unrivaled television production capabilities, we have succeeded in giving startups a national footprint, and national companies a global one. For additional information, visit www.brandstar.com.