On Saturday, legislators completed the 2019 Legislative Session in Tallahassee. Of the 3,751 bills filed this year, only 196 (5.2%) crossed the finish line. Unfortunately the bills Film Florida were advocating for (SB 526 by Sen Joe Gruters- R, Sarasota and HB 1401 by Rep James Buchanan- R, Sarasota, photos right) were not among those that passed. Regardless of the issue or industry, getting a bill of any kind passed in the Florida Legislature has become increasingly challenging. While we didn’t achieve the ultimate goal, it’s important to recognize the progress that was made in significantly building momentum, engaging in encouraging conversation and garnering positive media coverage for the industry.

The Legislative Session began with a renewed positive energy for our industry. It was clear even prior to session that the conversation in Tallahassee about the film, television and digital media industry was changing. The concept and details of the “Targeted Grant Program” put forth in SB 526 and HB 1401 were welcomed and praised on both sides of the aisle. The single largest challenge in creating a statewide program has been the Return on Investment to the state, regardless of the positive benefits to local communities. The state formula that measures ROI is based solely on state money going out versus state taxes (not local taxes) coming back. The Targeted Grant Program in SB 526 and HB 1401 addressed that which eliminates ROI as a negative talking point. Our strong relationships with the Florida Chamber of Commerce and Associated Industries of Florida continue to help our efforts in Tallahassee as well as the powerful research report done by Florida TaxWatch last Fall. Unfortunately, the philosophical belief by some in the Florida House that the government shouldn’t be involved in private industry (not just our industry but any private industry) remains a difficult hurdle.

Despite the challenges that remain in Tallahassee, it’s important to build on the positive momentum statewide. We have engaged and are building important relationships with legislators. These relationships will help next year, the year after and additional years down the road. Relationships are built between legislative sessions, not during. We encourage (STRONGLY URGE) you to get involved and engaged with your local legislators between June – September. Find your State Representative HERE and find your State Senator HERE. Once you have found your local Rep and Senator, e-mail us at info@FilmFlorida.org and we’ll give you details about your local legislators, as well as help you contact them to set up a meeting to tell your story in the film, television and digital media industry. Local constituents telling local stories and building local relationships are much more important than 100 e-mails from faceless people during legislative session.

In addition to SB 526 and HB 1401, with the help of our friends at COMPASS, Senate Resolution 1808 was filed by Senator Annette Taddeo (D- Miami-Dade County, photo right). SR 1808 is “a resolution recognizing the value of film and television production as an economic driver and a creator of high-wage jobs, encouraging the collaboration of public-sector and private-sector efforts through the development of programs and partnerships, and encouraging the Florida Office of Film and Entertainment’s continued support of various collaborative programs and partnerships for national and international marketing.” We are thrilled to report that SR 1808 was unanimously approved in committee by a combined vote of 20-0 and then passed the full Florida Senate, again showing the bi-partisan support for the industry. We sincerely appreciate the leadership of Sen Taddeo as well as Senate President Bill Galvano (R- Bradenton) and all of our Senate Champions to show that the Florida Senate values the film, television and digital media industry and understands the potential of the industry in Florida.

Despite the ongoing challenges in Tallahassee, Film Florida continues to focus (every single day!) on marketing and promoting the industry and the state of Florida as a premier destination for film, television, and digital media production work. While House Leadership in Tallahassee continues to undervalue our industry, local legislators in counties and cities have shown tremendous support with 7 counties (Broward, Duval, Hillsborough, Miami-Dade, Palm Beach, Pinellas, and Sarasota Counties), and 2 cities (Miami Beach, North Miami) with some form of program to enhance production work in their region.

There have been two Hallmark movies filmed in the Tampa/St. Pete area along with the independent film I Saw a Man With Yellow Eyes starring Harry Connick, Jr. and Katherine Heigel. South Florida hosted independent film Critical Thinking with John Leguizamo acting and directing, The Beach Bum starring Matthew McConaughey, a portion of Bad Boys 3 and will be welcoming an episode of the Amazon series Marvelous Mrs. Maisel. We also await the highly anticipated premiere of season 1 of David Makes Man, filmed in Orlando, for the Oprah Winfrey Network (OWN). Finally, we anxiously await the recently announced television series The Right Stuff this fall on the Space Coast and in Orlando. These are just a few of the recent noteworthy projects in Florida. As was recently reported, the local programs are executing exactly as they were designed to by bringing in projects with budgets of $1 – $3 million. To bring in projects in the $5 – $20 million range on a consistent basis, a statewide program is necessary and the local programs are laying solid groundwork to show legislators how successful programs can operate and show the positive ROI.

Between our messaging about the amount of lost business in Florida ($1 billion+ in last 4 years), the high-wage jobs in our industry (avg. $81K+ per year), film-induced tourism (Dolphin Tale, Bloodline, and many more), and the examples noted above, the positive energy for our industry is noticeably different at the Capitol. However, we understand moral support and positive energy do not pay the bills for those that work in the industry. That’s why, in addition to the active role Film Florida takes in many different marketing endeavors for the industry, our efforts will continue at the state level. Our membership and our industry as a whole has made it very clear that they believe continuing to educate legislators and pursue some form of a statewide program to help bring projects and jobs to Florida is important. We cannot do it alone and we need your help! 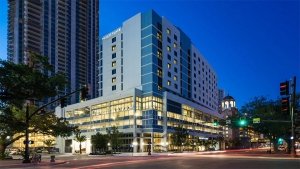 If you are not a member of Film Florida, we would like to encourage you to join the organization. As a not-for-profit, we are funded entirely by our members so our ability to work on behalf of the industry is completely dependent upon the support we receive through our membership efforts. CLICK HERE to learn more about our membership packages and to join. Finally, we hope you will make plans to join us at the Film Florida Annual Meeting in St. Petersburg (photo right). Film Florida members are invited to participate in Committee and Council meetings on Tuesday June 25 and Wednesday June 26 and the Board of Directors meeting on Wednesday June 26  is open to the public. CLICK HERE for more information about the upcoming Annual Meeting.

We appreciate your ongoing support and engagement, and we look forward to continuing to spread the positive message about our industry.