Emilio Estefan, Jr. and Gloria Estefan have been named the 2017 Film Florida Legends Tourism Ambassador Recipients. The award, presented by entertainment production association Film Florida, honors those legends in the entertainment industry that are true ambassadors for our state. The Estefans were honored for their Legendary work in music, theater, film, television, books, restaurants and their numerous philanthropic efforts during a ceremony on August 28, 2017 in Hollywood, FL.

“The Estefans are world-class entertainers and entrepreneurs, all the while being wonderful ambassadors for Florida,” Film Florida President Bonnie King said. “Across so many platforms and mediums, the Estefans continue to help others and accomplish so much, while representing the state of Florida in such a positive way.”

Gloria Estefan is the most successful Latin crossover performer in the history of pop music. She has sold over 100 million albums worldwide with 38 #1 hits across the Billboard charts. Emilio Estefan, Jr. is a world-renowned music, television and film producer who has been instrumental in shaping, developing and directing the careers of his superstar wife, as well as Shakira, Ricky Martin, Jennifer Lopez, Marc Anthony and Jon Secada among many others. Combined they have won 26 Grammy Awards, received stars on the Hollywood Walk of Fame, been inducted into the Latin Songwriters Hall of Fame, honored with the Ellis Island Congressional Medal of Honor, and received the Presidential Medal of Freedom, the highest honor bestowed on a civilian. This December, Gloria will receive the Kennedy Center Honors. Gloria and Emilio currently serve as Executive Producers to the Tony-Award nominated Broadway smash musical. . . ON YOUR FEET! …based on their lives and music. 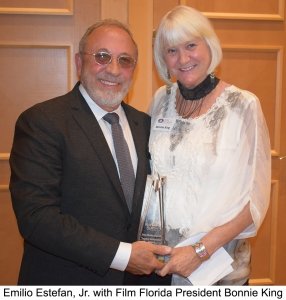 Earlier this Spring, Emilio served as director, producer and musician while Gloria was an actor, musician and singer in the film A Change of Heart. Starring with her are Jim Belushi, Virginia Madsen, Kathy Najimy, William Levy and Aimee Teegarden. The film premiered at the 34th Miami Film Festival at the Olympic Theater in Downtown Miami and was shot entirely in South Florida.

The Film Florida Legends Tourism Ambassador Award was presented at the Florida Governor’s Conference on Tourism on August 28, 2017 during the Chairman’s Dinner at The Diplomat Beach Resort in Hollywood, FL. Previous recipients of the award include Burt Reynolds and Sharon Gless. Click HERE for photos from the 2017 award ceremony.