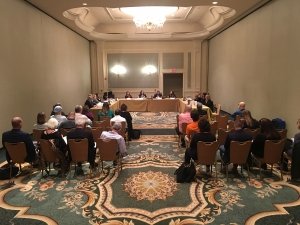 Film Florida had a great couple of days in Orlando for our December Quarterly Meeting. We want to thank our hosts from Film Orlando and Universal Studios Florida Production Group for their wonderful hospitality. Our Quarterly Meeting unofficially kicked off Wednesday, December 5th with the Florida Film & Entertainment Advisory Council (FFEAC) Meeting (photo right). With members appointed by the Governor, President of the Senate, and the Speaker of the House of Representatives, the purpose of the FFEAC is to serve as an advisory body to the Department of Economic Opportunity and to the Florida Office of Film & Entertainment to provide industry insight and expertise related to developing, marketing, promoting, and providing services to Florida’s entertainment industry. Congratulations to Film Florida member Nicholas Popp for being elected the new Chair of the FFEAC. Film Florida members were then surprised with an invitation to visit the set of David Makes Man, currently filming for the Oprah Winfrey Network (OWN) on the backlot of Universal Studios Florida. The group also had the opportunity to visit with David Makes Man producer Wayne Morris.

The Film Florida portion of the week officially kicked off Thursday, December 6th with the Education Council meeting where the initiative continues to be helping our member colleges and universities work with Florida-based film festivals that are also Film Florida members to make it easier for students to submit and participate in film festivals. The Industry & Association Council took over the discussion at the next meeting, continuing to work towards more professional development opportunities and the second F3 event, tentatively scheduled for October 2019. Thursday morning concluded with the Strategic Futures Committee reviewing some long-term initiatives for the organization, charting a path for the future of Film Florida as well as discussion of a concept that could help filmmakers in the future. 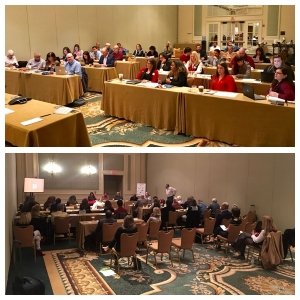 After lunch on Thursday, the Film Commission Council (photo right) continued the conversation about working closer with Florida-based film festivals that are Film Florida members. The Council also heard presentations about local programs bringing projects to the Jacksonville and Tampa areas. Thursday’s meetings concluded with a presentation and panel discussion hosted by Film Florida members, Teamsters Local 769 and SAG-AFTRA on the Florida Film Unions (photo right). The panel featured members from the IBT Local 769, SAG-AFTRA, ADG Local 800, ICG Local 600, I.A.T.S.E. Local 477, and DGA. The workshop helped those in attendance understand the value of Florida’s union workforce and the role it plays in bringing motion picture production jobs and economic impact back to the Sunshine State. Thanks to Film Florida members Chris Ranung (Local 477) and Dennis Blanchard (ADG Local 800) for bringing the workshop concept to our attention.

Thursday evening Film Florida was, once again, a proud sponsor of the Women in Film & Television – Florida Jingle Mingle at Islands of Adventure at Universal Studios Florida. Jingle Mingle is a very popular and highly attended holiday party for the industry each year so if you missed it this year, plan on attending next December.

The Film Florida Legislative Committee met Friday morning, December 7th (photo right). One of our Government Relations Consultants, Slater Bayliss from The Advocacy Group at Cardenas Group, joined us to talk about the results of the recent elections, what it means to the film, television and digital media production industry, and continue our discussions regarding potential legislation during the upcoming Legislative Session, starting March 5, 2019. Film Florida has spent considerable time over the last 6 months communicating with legislators and 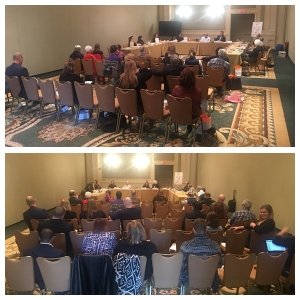 candidates. The focus has been on further educating legislators so they understand the challenges and opportunities for the industry in Florida. Many legislators are frustrated seeing the jobs and money that should be in Florida going to neighboring states. We have been exploring a number of options and we look forward to working with legislators, both Democrats and Republicans, on those options. We sincerely believe putting Floridians back to work at home, generating new revenues and increasing tourism is an important step toward growing and diversifying our economy. As our legislative plans continue to materialize over the next few months, we will let you know when your help is needed.

Our Board of Directors meeting took place on Friday after the Legislative Committee (photo right). While our committee and council meetings are open to Film Florida members only, the Film Florida Board of Directors Meetings are open to the public and we appreciate those that joined us. In addition to recapping the committee and council meetings, the Board meeting included updates from the Budget & Finance, Membership, and Marketing Committees as well as the Florida Office of Film & Entertainment. 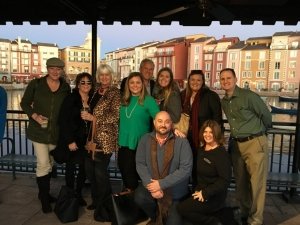 For those who attended our meetings, we hope that your visit with us was informative and productive. Partnering with the FFEAC and Women in Film & Television – Florida was a pleasure and hopefully it allowed others to experience additional aspects of the industry and network with more people. Along with many of our regular attendees, we were pleased that so many new Film Florida members joined us in Orlando. Our Quarterly Meeting in Orlando was our most attended meeting in a while, which was great to see. We look forward to seeing all of you again at future events, trade-shows and meetings across the state! For those members who are unable to travel, we encourage you to call in to the meetings via our conference call lines to remain engaged. If you’re not a member, please CLICK HERE and consider joining so you can participate in our committee and council meetings and protect your business interests. Our organization is only as strong as those that participate, and we always welcome new perspectives. Our next Board of Directors Meeting will be in March in Tallahassee when Board Members meet with legislators at the Capitol. Beyond that, our Annual Meeting will be June 24-26, 2019 in St. Petersburg. As always, thank you for your continued support and we look forward to seeing you soon.