While we continue to monitor Hurricane Irma, we wanted to update you on the recent Film Florida Quarterly Meeting in conjunction with the Governor’s Conference on Tourism, both at The Diplomat Beach Resort in Hollywood, FL. We had a very productive day of committee and council meetings on Sunday August 27th, including the Film Commission Council, Legislative Committee and Strategic Futures Committee. Our committee and council meetings are open to Film Florida members only and we were thrilled to see new members and familiar faces join us. Following the meetings on Sunday the Greater Fort Lauderdale/Broward Office of Film, Music & Entertainment hosted a wonderful event for Film Florida members and some of their local industry members. As is always the case when a local film office hosts us, we learn new things about the area and see more of what the community has to offer our industry. Thanks to Noelle Stevenson and Kristen Norona from the Greater Fort Lauderdale/Broward Office of Film, Music & Entertainment for all their efforts in setting up the reception.

Monday August 28th was the Film Florida Board of Directors meeting. Film Florida Board Meetings are always open to the public and we were pleased to have a great mix of new faces in our audience as well as new Board Members on hand. Our Board Meetings are a great way to hear what the entire organization is up to with reports from all of our Committees (Finance, Marketing, Membership, Legislative and Strategic Futures) as well as all of our Councils (Film Commission, Industry and Association, Labor and Education). Film Florida’s agenda is driven by our member committees and councils. If you are a member, we urge you to participate in as many as you can; and if you’re not a member, we encourage you to join and get active so your voice is heard. 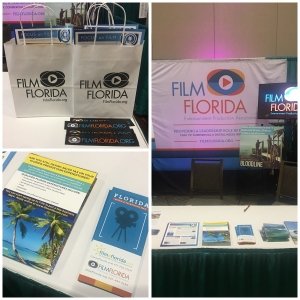 In addition to the award presentation, Film Florida had a booth set up during the entire conference, where members of the organization talked with hundreds of conference attendees about our organization and our industry. Whether it was a local attraction, a regional tourism development council or a state wide hotel/resort flag, we had great conversations about the undeniable connection between our industry and the tourism industry and more importantly, how we can continue to work together more which in turn benefits the entire state. VISIT FLORIDA’s statistic says 22.7% of domestic visitors stated a movie or TV show filmed in Florida influenced their decision to travel to here. We are proud to support our state’s #1 industry and we know the tourism industry understands the positive impact we bring to the state. It was a great 3 days in Hollywood, FL and we thank VISIT FLORIDA for having us and supporting the Film Florida Legends Tourism Ambassador Award. We appreciate everyone coming by our booth to offer support and kind words and we look forward to attending next year’s conference. 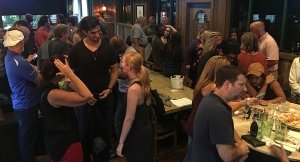 After our Annual Meeting in Destin in May, I told you we were making community outreach a priority to ensure Film Florida was present and active throughout the state. Since then we hosted our first Mix & Mingle networking event in July in Central Florida (right) and the next one is September 28th in Palm Beach County, click HERE for more info. We’re also hosting (along with our friends at Women in Film & Television- Florida) a professional development event including panel discussions and hands on experiences/tutorials October 21st in Central Florida. Be on the lookout for more information and to purchase tickets to the event very soon! Limited sponsorship and demo opportunities are still available, contact us if you’re interested.

Please mark your calendar for our next Quarterly Meeting, tentatively scheduled for December 11-12 in Orlando, Florida. We invite all Film Florida members to participate in the committee and council meetings on December 11th and as always, our Board of Directors meeting on December 12th is open to the public. In the meantime, please continue to prepare for Hurricane Irma and stay safe.