Florida TaxWatch Analyzes Florida’s Film and Television Industry: “The Status Quo is Not a Viable Option”

Home/News/Florida TaxWatch Analyzes Florida’s Film and Television Industry: “The Status Quo is Not a Viable Option”

Florida TaxWatch Analyzes Florida’s Film and Television Industry: “The Status Quo is Not a Viable Option” 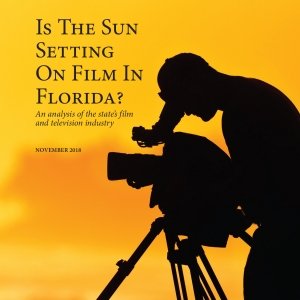 TALLAHASSEE, Fla. – Florida TaxWatch, an independent, nonpartisan, nonprofit government watchdog & taxpayer research institute, has released their latest research report, Is the Sun Setting on Film in Florida? An analysis of the state’s film and television industry. In the report, Florida TaxWatch dives into Florida’s film and television industry to examine how other states are luring in film production companies and identify strategies Florida can employ to remain competitive in the industry. Without a funded state-wide program to help bring projects and companies to Florida, in the last 4 years the state has lost more than 60 major film and television projects that would have spent over $1 billion dollars in Florida with 87,000+ cast and crew jobs for Florida residents and Florida-based companies. In addition, those projects would have also used 160,000+ hotel room nights state-wide.

The report states, “maintaining the status quo is not a viable option. The competitive nature of today’s economy, and of the film and television industry in particular, requires the strategic and targeted use of packages that will help to create thousands of high paying jobs and permit Florida to compete with other states and countries for film and television production projects.”

“Florida once had the most fiscally conservative program in America that had a solid return-on-investment to the state,” commented Paul Sirmons, a Florida-based independent producer and former State Film Commissioner under Gov. Jeb Bush. “We can do that now with a targeted program that will send a signal to the industry in Florida, the United States, and the world that Florida is open for business and ready to lure in the very high-wage jobs in the film, television and digital media industry. It wouldn’t take much to put Floridians back to work here, generate new revenues and boost tourism — which movies and TV shows have been shown to do quite effectively.”

Direct film and television industry jobs generated $53 billion in wages nationwide in 2016, with average salaries 42 percent higher than the national average. There were nearly 342,000 jobs in the core business of producing, marketing, manufacturing, and distributing motion pictures and television shows. In 2017, there were more than 4,400 established businesses in Florida’s film and entertainment industry (excluding digital media), employing more than 26,000 Floridians. According to the Bureau of Labor Market Statistics, the average annual wage for an industry professional in Florida is $81,720, 68.6% higher than the average annual wage for all jobs in Florida. With the advent of digital technology and the ability to view content through any number of platforms, job creation and revenue could increase for state and local governments.

“There has never been more content available to viewers than there is today and we believe that content should be created in Florida, creating high-wage jobs for Floridians, pumping new money into our economy, and showing off our state on the large, small and mobile screen,” noted Bonnie King, President Film Florida. “Florida TaxWatch has an impeccable record of integrity, professionalism, and quality in their research and we appreciate their efforts to highlight the current state of the industry in Florida.”

“Economic development has been a longtime focus of the Sunshine State,” said Florida TaxWatch President and CEO Dominic M. Calabro. “Florida’s business-friendly tax climate, good weather, and beaches have their advantages; however, state policymakers should strongly consider a sound, fiscally-responsible incentive program to help grow targeted industries such as film and television production.”

The report concludes by saying, “Florida is not the only location that can offer a business-friendly tax climate, good weather, beaches, and a talented workforce. For Florida to be competitive, it must be willing to make available a package … that help film and television companies reduce their costs and generate greater returns, while pumping millions and millions of dollars into the state’s economy.”

About Film Florida
Film Florida is a state-wide not-for-profit entertainment production trade association that serves a leadership role in Florida’s film, TV, production and digital media/tech industry by representing all aspects of the business including film commissions, industry, labor, associations and education. The growing membership driven organization provides a network, a platform, and the benefits of playing an active part in solidifying Florida’s position as a major entertainment production destination, positive economic development driver and tourism generator. For more information about Film Florida visit FilmFlorida.org.