Spreading the Word of Florida at NATPE, Sundance and The Realscreen Summit

Home/News/Spreading the Word of Florida at NATPE, Sundance and The Realscreen Summit

Spreading the Word of Florida at NATPE, Sundance and The Realscreen Summit

In the last few weeks, members of Film Florida attended NATPE, Sundance Film Festival, and the Realscreen Summit with a single purpose: attract business to Florida. January 21 – 24, the largest contingent of Film Florida members in recent memory (22 people) took advantage of the discounted group rate and attended NATPE in Miami Beach. The NATPE Miami Marketplace & Conference inspires the growth and success of content across all platforms by hosting an annual marketplace and conference that pulls content buyers, sellers, distributors, advertisers, and influencers from around the globe to make deals and share in the international conversation. The week started with Film Florida co-sponsoring the Greater Miami Convention & Visitors Bureau Welcome Reception. The reception was attended by 300+ people and was a great opportunity for local representatives to promote filming in South Florida. The Film Florida Booth saw lots of meetings and traffic throughout the week (photo right). Film Florida members took advantage of the opportunity to schedule meetings with potential buyers and producers. In addition, Tuesday – Friday was stacked full of keynotes and panel discussions about the current and future state of the industry. 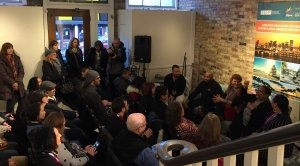 After NATPE, a number of Film Florida members, including a few that were at NATPE, attended the Sundance Film Festival in Park City, Utah. While Sundance is not an official Film Florida sales mission, the festival was covered with representatives of the State Film Office, local film commissioners, as well as industry professionals. Film Florida members FilMiami and the Greater Miami Convention and Visitors Bureau led the efforts with a storefront lounge available for 5 days as well as a featured panel discussion on diversity in the industry (photo right). 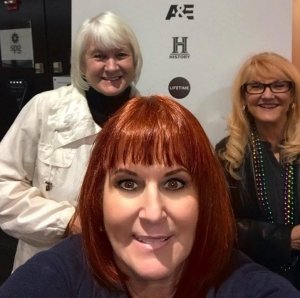 The Film Florida sales missions are intended to give our members the opportunity to participate in a variety of activities, in Florida and outside, while taking advantage of group discounts making many sales missions experiences more cost effective than if you attended on your own. Additionally, we make an effort to host some sort of reception at select sales missions which gives our members the exclusive opportunity to invite guests and network with those that could be potential clients or partners.

Upcoming sales missions include SXSW in Austin, Texas in March, eMerge Americas in Miami in April, Tribeca Film Festival in New York in April/May, Produced By in Los Angeles in June, Realscreen West (tentative) in Los Angeles in June along with others in the Fall. If you are interested in learning more about any of our sales missions, we encourage you to reach out. Based on feedback we’ve received, in addition to offering packages for Film Florida members, we also try to offer packages to non-members, although prices will usually be better for Film Florida members. In addition to our stable of sales missions, we are regularly promoting local in state events such as Film Florida member Film Festivals. Be sure to watch our social media pages for information about events throughout the state.