First, I hope everyone had a happy holiday season and that 2023 is off to a healthy positive start. When I was first elected President of Film Florida in June of 2020, little did we know what the next few years would be like. Our organization, our industry and our state have 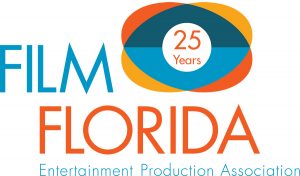 persevered through challenging times. As I look forward to my last six months as President of Film Florida, I am also proud of what we have accomplished.

For those that aren’t aware, 2023 is Film Florida’s 25th year in existence. What started as a group of local film commissioners coming together to be more effective and efficient in marketing the state has grown into so much more. We will be celebrating our 25th anniversary throughout the year and we want to sincerely thank each and every person that has had a hand in getting Film Florida to this milestone. From the original film commission members, some of which are still active in the organization today, to all of our members, supporters and partners, thank you for helping us achieve this milestone. 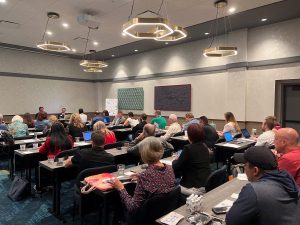 As I look back on 2022, our Quarterly Meetings returned to in-person meetings, while still incorporating virtual participants. It was fantastic to spend time in Tampa, Fort Lauderdale, Boca Raton and Orlando for Quarterly Meetings in 2022. During our most recent meeting in Orlando, many Film Florida members attended Women in Film and Television Florida’s Jingle Mingle, the first Jingle Mingle since 2019. Film Florida is proud of our long-term relationship with WIFT and we were honored to present a joint Film Florida-WIFT Sara Fuller Scholarship to Film Florida and WIFT member Mark Felbinger at the event.

2022 also saw the return of in-person marketing opportunities, both in-state and out of state. Our best sales and marketing tool is ourselves. During the past year Film Florida members attended the Tribeca Film Festival, Realscreen Summit, ProducedBy, Toronto International Film Festival (TIFF), American Film Market (AFM) and FOCUS. Whether you are part of Film Florida or not, be on the lookout for special packages in the future so you can help spread the message that “Florida is open for business!”

Reminder, when we’re asked why we participate in out of state events, as opposed to in-state events, we do both! It’s important that our members, and non-members, have the opportunity to travel outside Florida to promote the state to worldwide content creators. These networking opportunities are vital for local film commissioners and industry professionals to meet and connect with potential partners and clients. As a colleague of ours says, “you must be present to win.” It’s also important to note that when Film Florida coordinates for the out of state events, the organization is NOT paying for those to attend. We coordinate so group discounts are available for those paying for the trips.

That said, in-state marketing and networking opportunities are also a priority and 2022 brought back a lot of those opportunities to us. There are now 19 film festivals (and the like) that are members of Film Florida. We recently started a monthly email blast highlighting these member events, in addition to including them in our newsletter emails and regularly on social media. Local film festivals are positive economic drivers for communities and allow areas to show off to those traveling from elsewhere while being tremendous networking opportunities. Film Florida takes great pride in supporting those film festivals that support our organization through their membership. 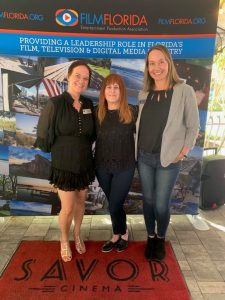 In addition, Film Florida members were also present in-state at the Miami Media and Film Market (MMFM) and the Florida Governor’s Conference on Tourism. We resumed our tradition of presenting the Film Florida Legends Tourism Ambassador Award at the Governor’s Conference on Tourism. The 2022 recipient was producer and host Burt Wolf. In November, Film Florida hosted a networking event in Fort Lauderdale (photo right) in conjunction with the Fort Lauderdale International Film Festival where more than 60 people attended. The goal is to host two more networking events in South Florida in 2023, one in Central Florida and possibly more throughout the state as Film Florida members volunteer to help coordinate.

We are still making the most out of virtual opportunities as well. Later this month we will be hosting members of the Location Managers Guild International (LMGI) for a virtual FAM tour. This event will feature a few of Florida’s top location managers and a video presentation showcasing the entire state to location scouts and managers from around the world.

Film Florida continues to support Florida filmmakers through the Florida Emerging Filmmakers Fund, the Don Davis Finishing Fund and the Sara Fuller Scholarship. The grants and scholarships provide cash in the amount of $1,000 – $2,000 per project to deserving filmmakers needing help for their film projects. Film Florida awarded $10,000 in 2022 to worthy homegrown projects and we look forward to continuing in 2023.

During my time as President, at the urging of a member, we started Film Florida Fridays. Film Florida Fridays are free interactive conversations about current topics, initiatives and relationship-building. These conversations take place one Friday each month at 9:30am ET on Zoom, where industry professionals and up-and-comers are encouraged to gather with a cup of coffee, ask questions and speak directory with industry leaders. These sessions are very informative, and I encourage you to attend as your schedule allows as they are open to the public. Our next Film Florida Friday is February 10 featuring a discussion with union leaders in Florida, Click HERE to register. You can also view previous editions of Film Florida Friday HERE. 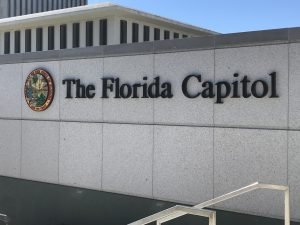 As many of you know, Film Florida continues to advocate for the industry locally and in Tallahassee. All 160 seats in the Florida Legislature were up for election in November. Our efforts started last summer by reaching out to all new candidates, asking them to fill out a survey to gauge their knowledge and support for our industry. Efforts continued throughout the Fall with individual meetings with incumbents and newly elected legislators. Volunteer members of Film Florida are speaking at Legislative Delegation Meetings throughout the state in December, January and February. Delegation Meetings are an opportunity to speak in front of all State Reps and State Senators from a county and encourage them to support our industry. Additionally, we encourage everyone to find their State Representative and State Senator, reach out and encourage them to support our industry. You can also respond to this e-mail at info@FilmFlorida.org with your home address and we will give you information about your legislators. If everyone will spend just 1 hour on this task, the future will be much better for our industry. We HIGHLY ENCOURAGE everyone to help educate legislators about our industry.

I am honored to have been President the last 2 1/2 years. I am so proud of what Film Florida has accomplished in that time, but I’m not done yet! We have numerous goals and exciting initiatives for the next year and beyond, and we hope you will participate with us. Our organization continues to grow and we are eternally grateful for the continued support. The last five years has seen tremendous growth for Film Florida, more than doubling our membership in that time. That shows the commitment everyone has to growing and strengthening our industry. Without that support from our members, we are not able to provide the representation that we do throughout the year. If you’re not a member, we encourage you to join Film Florida and get involved to ensure your voice is heard. Corporate memberships start at $500, individual memberships are just $75 and student memberships are just $25. Everyone gets a new Film Florida t-shirt when they join or renew in 2023.

I appreciate your engagement, participation, and support and thank you for allowing me to serve as Film Florida President. From my heart to yours, Happy New Year.