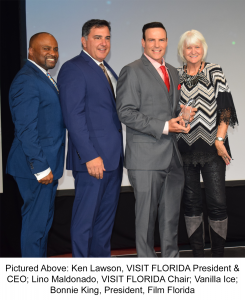 Hip hop artist, reality television series star, philanthropist and Florida resident Vanilla Ice has been named the 2018 Film Florida Legends Tourism Ambassador. The award, presented by entertainment production association Film Florida, honors those legends in the entertainment industry that are true ambassadors for Florida. Vanilla Ice was honored for his work in music, television, and in his community during the Chairman’s Dinner at the Florida Governor’s Conference on Tourism on September 12, 2018 in Central Florida.

“Vanilla Ice has been a recognizable artist for nearly 30 years, all the while being a wonderful ambassador for Florida,” Film Florida President Bonnie King said. “Starting with his record-breaking hip hop career, which continues today, to starring in his own home improvement reality show to his numerous philanthropic contributions, Vanilla Ice continues to help others and accomplish so much, while representing the state of Florida in such a positive way.”

Vanilla Ice released his first record in 1989. A year later the “B” side of that record was released and 72 hours later, radio stations nationwide began receiving requests to play Ice Ice Baby, forever marking its place in history as the first hip hop single to reach #1 on the Billboard Hot 100 charts. By late 1992 over 17 million copies were sold, still holding the historic record as the highest selling debut album ever. 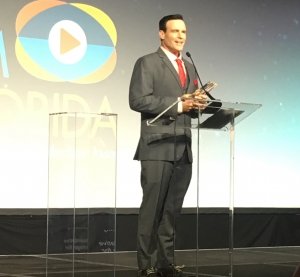 Vanilla Ice is also the subject of an upcoming documentary. Executive Producers, Helen Murphy (former CFO of Warner Music and Martha Stewart Living) and Frank Licari (actor, writer, producer) teamed up with Kvibe Productions, LLC (Walt Before Mickey) to bring the documentary film, ICE ICE BABY – Hip Hop’s First Global Number One to the big screen. The film tells the story of the rise and redemption of Rob Van Winkle (aka Vanilla Ice) and is slated for a mid-2019 release.

Vanilla Ice goes out of his way to support and encourage young artists and gives graciously to the community he calls home. He hosts an annual holiday block party in Wellington, FL raising money and collecting toys for children in need. He stars in his own home improvement reality show, The Vanilla Ice Project, now in its 8th season on the DIY Network. The show includes more than 100 episodes aired, including most episodes taking place in Florida, with multiple seasons in Palm Beach County and season 7 in Florida’s Space Coast. In addition, he annually presents the music video award, now named after him, at Florida’s largest film competition and awards show for student filmmakers, The Palm Beaches Student Showcase of Films.

He is a staunch Teenage Mutant Ninja Turtle fanatic and a motocross and jet ski champion. He has made cameos in several films, and continues to perform around the world. His boundless energy and his genuine love and support for the entertainment industry, and his home state of Florida, makes him a true Florida entertainment industry legend and ambassador. 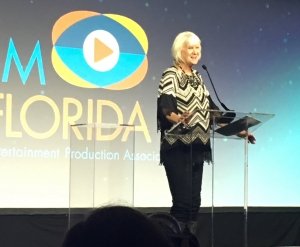 In 2006, Film Florida started honoring “Legends” in the entertainment industry. This is the 4th year the award presentation has been part of the Florida Governor’s Conference on Tourism. The award recognizes someone that has achieved great success in the entertainment industry while also being a great ambassador for the state of Florida. Recent recipients of the award include Burt Reynolds, Sharon Gless, Emilio and Gloria Estefan.